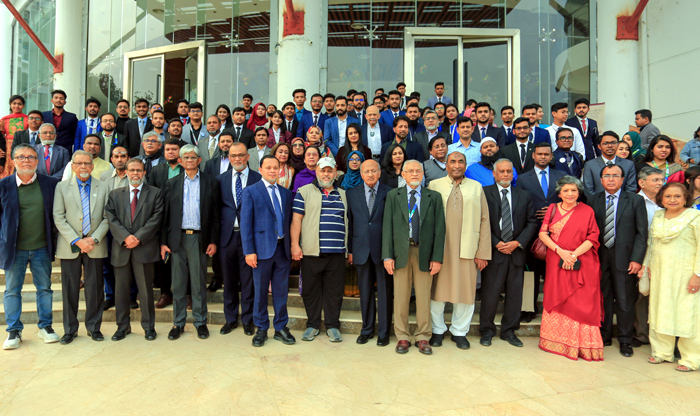 In a unique event to honor business leaders of Bangladesh, twelve first generation entrepreneurs, the pioneers of business from undivided India moving on to East Pakistan and to independent Bangladesh, with their businesses still running strong, were handpicked to be presented to the people through a book today. The solemn launch occasion of ‘পথিকৃৎ উদ্যোক্তাদের জীবনসংগ্রাম’ (The Life Stories of Struggles of Pioneering Entrepreneurs), edited by the Chairman of Daffodil Group, Dr. Md. Sabur Khan, was done in the presence of the families of these entrepreneurs along with one of them who is still going strong, at Daffodil Smart City, located in Savar, Dhaka.

The only surviving entrepreneur of these twelve, founder of ACI group, Anis Ud Dowla (the only other surviving entrepreneur, Syed Manzur Elahi of the Apex group, is indisposed), called it a distinctive initiative, and noted that no one has monopoly of wisdom and anyone can evolve to be a fore-ranking entrepreneur or institution-builder, for which lifelong learning is needed. He underlined that ACI was the first company in BD with ISO certification. It upheld the values of quality, customer focus, innovation, fairness and continuous improvement. It is a local company with an MNC culture and outlook and initiated its business first through exports of world class footwear and then came to the domestic market. His one major success formula has been complete delegation of authority and clearly defined responsibility at every level, with full autonomy for the senior executive to exploit his full potential. He noted, “I learn every day even till this day. You must love deeply the work you do. Never do the same thing twice exactly the same way.”

Bhattacharya lauded the twelve inspirational stories in this volume and noted that this must go into the educational curriculum to bring it to the younger generation the stories of how homegrown entrepreneurs have evolved from the scratch, or received resources by inheritance, while some acquired ailing firms and turned them around remarkably, and some started first with exports to create higher standards.

He explained that traditional economics talks about a linear movement from agriculture to manufacturing to services. But today, BD is witnessing a phase of premature de-industrialization with services evolving fast and contributing almost half of the GDP of the nation, and agriculture declining yielding place to manufacturing, which thanks mainly to the textiles sector, has already crossed 25% of the GDP. Role of the 12 entrepreneurs has been seminal in this unique transition within the economy.

He found the common message in everyone’s life-story: they worked from their heart doing community outreach long before corporate social responsibility or CSR was a buzzword; and for them corporate ethics was the name of the game. They have left a legacy of institutions built on values for building the nation.

Carrying forward the story of CSR, economist Salauddin Ahmed, the chief guest of the morning, noted that education and health are must areas of CSR of these enterprises today.

He urged the publishers to bring it out as case-studies in English too for global consumption, and also have a future edition on the success stories of rural micro and small businesses.

A former bureaucrat himself, Mr Ahmed lamented that though government and bureaucracy are expected to take out the obstacles in the path of the enterprises for them to grow better and create more wealth for the nation, it has not always been the case.

He warned that there are deep challenges in the economy, and recessionary trends are there, worsened by COVID and Ukraine war. Hence, the enterprises need to tread carefully, adding value, keeping costs low, and doing meaningful CSR, not misusing it under pressure or favour. They must take forward their enterprises with a bit of instinct and a lot of dreams.

Creative and advertising genius and entrepreneur Gitiara Shafiya Chaudhary recounted stories noting how she learnt a lot from these entrepreneurs who were strict and steadfast. She lauded the initiative noting that telling stories of earlier generation and its business leaders is a significant step towards inspiring and equipping the next generation.

Akij Group MD, Sk Bashiruddin Akij, who arrived by helicopter from Mymensingh a bit late due to weather conditions, started with the Chinese proverb, ‘The journey of a million miles starts with a single step.’ He recounted how his father, Sk Akijuddin, founder of Akij Group, left home from Jessore to Kolkata and started his business life from the railway station and footpath feeding initially on Chhatu only. Human value creation was significant part of his father, the Akij Founder, along with material value as he grew the business.

Chairperson of Desh group, Rokeya Quder, wife of the Desh founder, Md. Nurul Quder, strongly noted that education is important and her law degree stood her in good stead even in her business. She urged all present to complete their education and continue learning even in business.

Anwar Group chief, Maminur Anwar, who attended in spite of not being fully well, saluted the efforts telling that the industrial and economic history and roots of BD have been documented through it. “I felt like walking through the last seven decades of East Pakistan to BD as I entered the campus due to the displays all around. DIU will get into league of Purdue or Harvard in South Asia with time,” he noted.

“My dad forced me to clean the cycle of my teacher for two years, daily, since I misbehaved with my teacher, to teach me humility and respect towards teachers. My dad was educated formally till Class II only, but ensured that I had higher education,” he further said.

He was elated and noted that the man Anwar Hossain (founder of Anwar group) was being celebrated more than the businessman, since he helped people even before they asked for help.

He lamented that the powerful in BD are focusing more on creating small time skilled workers for ease of business and for earning remittance, whereas the BD youths have the talent to be engineers and doctors and managers and contribute to the economy better.

The PRAN group chief, Ahsan Khan Chaudhary, recounted how his father, the founder of PRAN group, Maj Gen (Retd) Amjad Khan Chaudhary, set personal examples to make the team inspired. Repeating their corporate mission to create dignity through profitable business, he lauded the celebration of great business endeavors and success through the book and the event.

The editor of the book and the Chairman of the Daffodil Group, Dr. Md. Sabur Khan, speaking towards the end, noted that there shall be more value additions in the book. And urged the families of the twelve pioneering entrepreneurs of BD to keep contributing many anecdotes, references, pictures, videos and links so that these can be shared in an organized fashion in DIU Forum, which is among the five most visited forums online among all universities of the world.

He lamented that people only focus material success or occasional mistakes of entrepreneurs, without actually looking into the sage of struggles and challenges they face. He explained how an entrepreneurial mindset has been created in every aspect of the Daffodil campus functioning and that five crores taka fund has been created to help incubate businesses by the learners of business on campus.

He urged all present to give examples of BD business pioneers in our daily discussions and not necessarily those of global business leaders like Elon Musk et al, because the homegrown business leaders have survived and grown in an environment of lack of good governance and social tensions often, along with lack of easy opportunities and funds, unlike those in the Western nations.

The publishers intend to come out with future editions on entrepreneurs starting their businesses after 1947 next, and thereafter, those who have commenced their work post freedom of 1971.

We have 816 guests and no members online