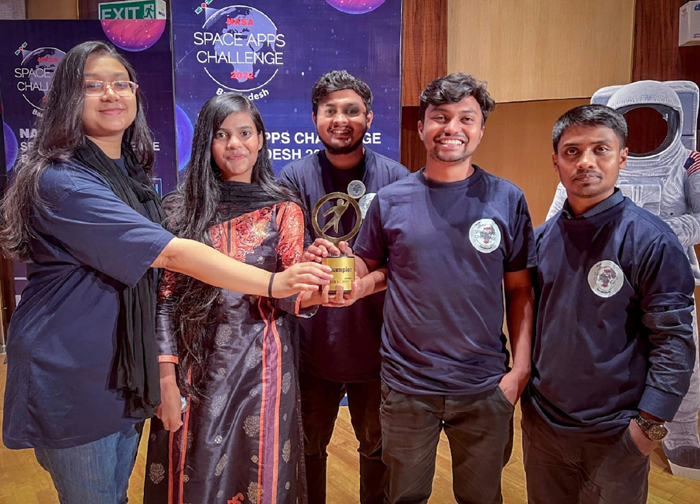 Team Diamonds, a team of students from Daffodil International University's Software Engineering department has won the NASA Space Apps Challenge 2022 competition as the 'Most Inspirational' project this year. The final results of this competition were announced by NASA, abbreviated as 'National Aeronautics and Space Administration' of America, on Thursday midnight Bangladesh time. It is broadcast live worldwide on Facebook, Twitter and YouTube.

"Team Diamonds" was the only Bangladeshi team in this list of 35 teams to make it to the Global Finalist of NASA Space Apps Challenge 2022. Bangladesh Association of Software and Information Services or BASIS organizes this competition in Bangladesh.2814 teams from 162 countries of the world participated in NASA Space Apps Challenge 2022 and after all the scrutiny, international judging process, “Team Diamonds” became the global champion as the only team from Bangladesh. They have worked with children so that they can think about space from a young age, learn about all the unknown facts of space very easily. For many stars in the sky, their changes are usually not visible to the naked eye because these changes are too slow or too faint for the eye. The main theme of their challenge was to teach people about this stellar variability and help them understand just how dynamic the night sky really is!

Winners project "Diamond in the Sky " is an interactive game based space learning system, through which children will learn about the reasons behind changes in stars (changes in color, brightness, mass). By playing the game, kids can start from creating their own stars to predicting the stars' patterns, color changes, brightness, mass changes.

The aim was basically to give children an opportunity to understand the twinkling of stars, the slow changes in the night sky and why they happen. They said - We believe that our app will play an important role in making people aware of the azana of space from a young age and showing the unseen.

Dr. Md. Sabur Khan, Chairman of the Board of Trustees and Professor Dr. M. Lutfar Rahman, Vice-Chancellor of Daffodil International University congratulated the team members for being champion in the competition and bring prestigious honour for the country.

We have 923 guests and no members online