Dr. Md. Sabur Khan has been elected President of Association of the Universities of Asia and the Pacific 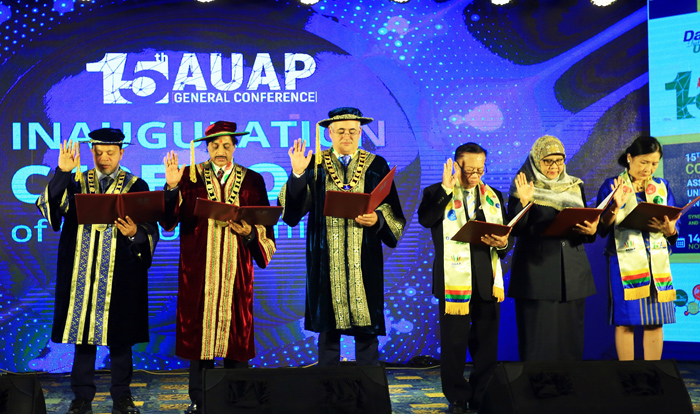 Dr. Md. Sabur Khan (Extreme left), Founder of Daffodil International University and Daffodil Family along with his new board have been taking oath as the President of Association of Universities of Asia and the Pacific (AUAP) for the tenure of 2023-2024 as the first Bangladeshi at the 15th General Conference 2022 held in Dhaka , Bangladesh.

Dr. Md. Sabur Khan, Founder of Daffodil International University and Daffodil Family, has been elected President of Association of Universities of Asia and the Pacific (AUAP) for the tenure of 2023-2024 as the first Bangladeshi to assume such a prestigious and leadership role – that will reshape the higher education in the world’s most populous region – Asia and the Pacific – that has 5,984 universities.

The outgoing First Vice-President of the AUAP, he was sworn in as the President on the second day of the 15th General Conference of the AUAP that concluded recently in Dhaka, Bangladesh. He is the first Bangladeshi national to take over the prestigious role.

With 180 members, the AUAP represents Asia and the Pacific region that has 5,984 universities – making it one of the largest regional groupings of higher educational institutions in the world. Dr Sabur Khan will formally assume the responsibility in January 2023 for a two-year term.

The 15th General Conference of AUAP, organized by Daffodil International University, was attended by more than 60 delegates from 30 countries, and more than 30 universities.

Dr. Sabur Khan, former President of Dhaka Chamber of Commerce, started his entrepreneurial journey in the early 1990s in information technology and education. He went on to establish the largest private university in Bangladesh – Daffodil International University – part of the Daffodil Group of Companies that currently owns 55 business ventures in Bangladesh, Malaysia and the United States.

Bangladeshi higher educational institutions, that include 163 universities, 115 medical colleges and more than 2,500 colleges, are expected to serve 4.6 million students by 2025, according to a research report. More than 30 million students are groomed by the country’s education sector every year – making it one of the largest education service industries in the world.

“Prime Minister Sheikh Hasina undertook the project to establish Digital Bangladesh in the world by 2021, which we have achieved, and we need to now move to Industrial Revolution 5.0 to make technology ensure social and human development, leading to a developed Bangladesh in next ten years,” Mustafa Jabbar said. "The main aspect of the 5th industrial revolution is the direct interaction of technology with people, leading to social and human development, and not just technology growth. I hope with Dr Md Sabur Khan of Bangladesh becoming the new AUAP President, the nation will benefit technologically and leap to the next phase of industrial revolution."

Dr. Peter P. Laurel, the outgoing president of AUAP, applauded members of AUAP to keep the work of the organisation and the avowed task of delivery of higher education going strong in spite of the pandemic over the last two years.

Later the General Secretary of AUAP exchanged greetings with the new appointees of the Executive Board and Advisory Council of AUAP. Then the newly-elected president, Dr. Md. Sabur Khan was welcomed by AUAP with ceremonial flag and flowers by the former president Dr. Peter P. Laurel.

Dr M. Sabur Khan pledged to take the AUAP initiatives, membership and transparency of activities to the next level and focus on students’ upliftment and teachers’ capacity building.

AKM Enamul Hoque Shameem MP, Deputy Minister for Water Resources, Government of Bangladesh, expressed joy for a Bangladeshi education entrepreneur for being the new AUAP President, and hoped that higher education of the nation will get a global push and recognition.

The three-day international conference hosted more than 300 Memoranda of Understanding (MoUs) among the attending universities for greater collaboration, student exchange, education tourism and academic exchange programmes as part of the AUAP’s vision to bring universities closer to each other.

We have 959 guests and no members online