Head of the Department of Computer Science and Engineering Professor Dr. Syed Akhtar Hossain said, "To survive and thrive in the fourth industrial revolution, you have to make maximum use of your merit by improving critical thinking and problem-solving skills, to do so there is no alternative to know programming." Under his leadership, Daffodil International University CSE department is taking various steps to motivate students to study programming. Free training classes are organized at the university by world-finalist programmers. Besides, there are various opportunities for first semester students, including special workshops, programming training trackers, advanced camps for advanced programmers, separate labs for night contests. In addition to the ICPC, Daffodil International University is organizing a "National Girls Programming Contest" on a regular basis.

Daffodil International University's Computer Programming Club organizes "Take-off Programming Contest" every semester for students of the first and second semester. Through this competition, students get a taste of the world of contest programming at the initial level of university life. With the support of the departmental head, this initiative was taken by Adjunct Professor Mohammad Mahmudur Rahman (CEO, Code Marshal and ACM World Finalist 2017). Under their supervision from 2016, 11 seasons of this contest was successfully done. Where more than 3000 students participated. 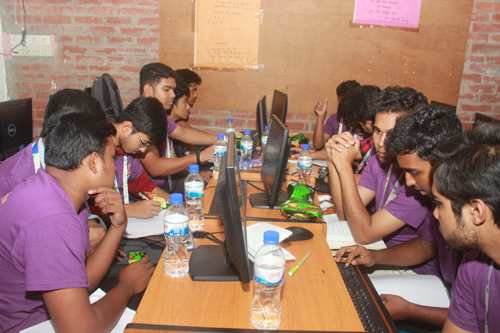 The entire program was organized by the Daffodil International University CSE Department. Under the overall supervision of the departmental head, a group of about 15 alumni teachers organized the program. Led by Assistant Professor Narayan Ranjan Chakraborty, Senior Lecturer Saiful Islam, and Lecturer Jahangir Alam among others. This arrangement was successfully completed under their leadership. Software Department and Multimedia and Creative Technology Department also helped in organizing and participated in this competition. The competition started at 3 pm and ended at 8 pm. BUET HellBent was the first in the contest. The second and the third runner up were respectively BUET Doofenshmirtz Inc.and SUST_Whiplash. From Daffodil International University DIU_Tr0jAnZ, DIU_Turtles and DIU_Beli3v3rs became first, second and third respectively. There were more than 15 all girls team from Daffodil International University this year where DIU_Heuristic became the first in all girls team inside DIU. Note that the top teams from each university will participate in the ICPC Dhaka Regional 2020. Which will be held at Southeast University this year. We have 5542 guests and no members online