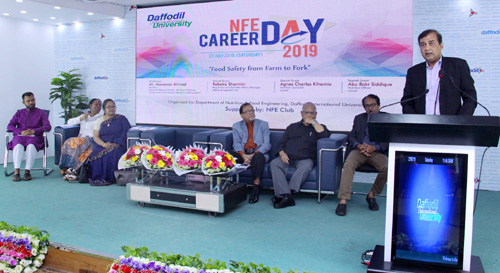 Department of Nutrition & Food Engineering (NFE) of Daffodil International University organized ‘NFE Career Day-2019’ with the slogan of ‘Food Safety from Farm to Fork’ today on 27 July 2019. Mr. Monowar Ahmed, Secretary, Economic Relation Division, Ministry of Finance inaugurated the program today at 71 Milonayoton of the university as the chief guest while Ms. Rebaka Sharmin, Regulatory & Scientific Affairs Manager of Nestle Bangladesh, Ms. Agnes Charles Kihamia, Nutrition Specialist of UNICEF and Mr. Abu Bakr Siddique, Nutrition Officer of UNICEF were present as the special guests. Presided over by Professor Dr. S M Mahbub Ul Haque Majumder, Pro Vice Chancellor of DIU, the program was also addressed by Professor Dr. Ahmad Ismail Mustafa, Dean, Faculty of Allied Health Science, Professor Dr. Engr. A K M Fazlul Hoque, Registrar, Dr. Amir Ahmed, Associate Head, department of NFE of DIU. Beside this Professor Dr. Md. Bellal Hossain, Head of the department of NFEpresent a keynote presentation titled ‘Food Safety Preventive Controls Alliance’ in the program.
While addressing as the chief guest Mr. Monowar Ahmed said that half of our total population is women and most of them are suffer in malnutrition. Basically, those women who live in remote area are suffering the most. They give birth of malnutrition suffered babies. So that it’s a very big briar to build a healthy nation.  Graduates of food and nutrition sector should play a vital role to overcome this situation. He added.
Mr. Monowar Ahmed also said that the government has passed the food safety act-2013 and the government also declared recently that a Nutrition Officer will be appointed in every government hospital.  So, no doubt that government is very sincere about food and nutrition of the people. Beside government, non-government organizations should also be sincere about this issue. He thanked Daffodil  International University for arranging this kind of program.
Ms. Rebaka Sharmin said that getting safe food is a right for every people. But, most of the foods that we get in restaurant and road side hotels are not hygienic. Government and mass people should be more conscious about taking hygienic foods.
Ms. Agnes Charles Kihamia said that there is a big challenge to deal the malnutrition problem. In this country, a huge number of pregnant women suffer in malnutrition till now. Students of NFE would play an effective role to prevent this problem. She expressed her hope.

We have 877 guests and no members online