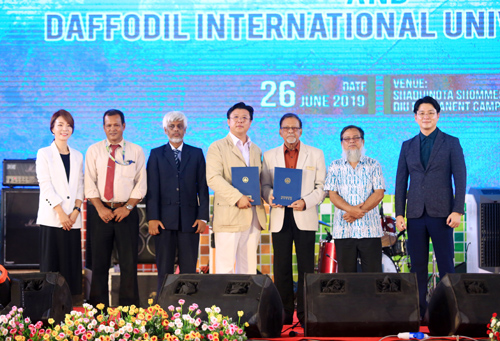 With a view of cross-cultural sharing experience, a team of 28 delegations from Hanseo University, South Korea visited Daffodil International University (DIU) Bangladesh on 26 June 2019 to perform Korean Pop Music Concert at the Permanent Campus of DIU in Ashulia. Around 3000 students of different departments & campuses took part to experience the Korean Pop Music performed by the Music Department students & professors of Hanseo University. An exclusive performance was also presented by the Cabin Crew Department students. At the concert, the team gifted the audience a bucket of Korean pop songs, famous Bengali and English songs to the audiences. Everyone was surprised to see the beautiful singing of Bengali songs at the concert by Korean performers. The concert started with a collaborative vision between Hanseo University and DIU as both universities signed a Memorandum of Undemanding, where Professor Dr. S.M. Mahbub Ul Haque Majumder, Pro-Vice Chancellor represented DIU and YUN TAE SEOUP Chief Secretary to the President Professor, Department of Animation represented Hanseo University. The delegation also planted trees near the Shaheed Minar of DIU green permanent campus along with a campus tour. 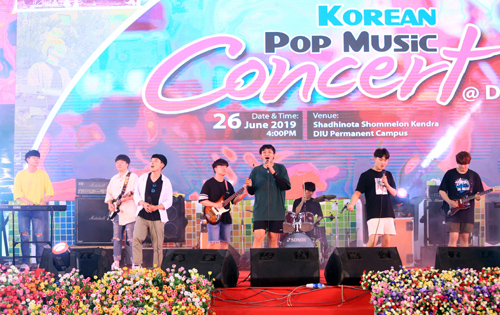 An exceptional education can improve a person’s life by exchanging knowledge. Keeping this motto as a development strategy, DIU has wholeheartedly organized this cross-cultural exchange programs between DIU and Hanseo University students to share, learn and experience the cultural practices of both countries. These 28 delegations expressed their satisfaction and great learning during their participation at DIU and showed their gratitude to come back again.

We have 106 guests and no members online