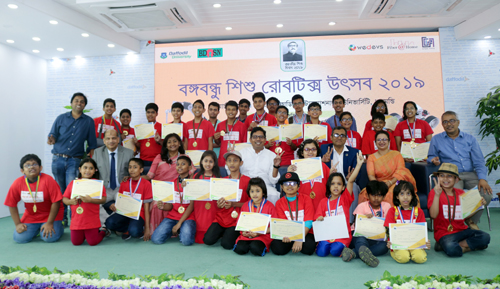 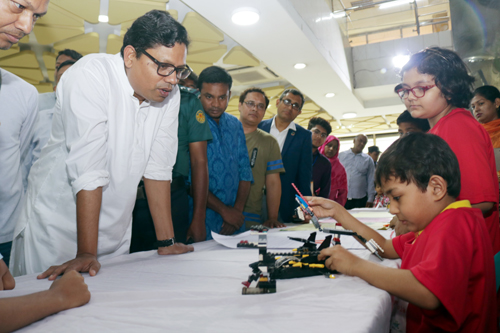 The daylong festival included Robot Exhibition, Robot Competition, Scratch Programming Competition, Robot control Competition, Industry 4.0 Competition and Nino Robot following Competition. Around 100 student from different schools of the capital took part in these competition and 1st, 2nd and 3rd position winners of each category each category were awarded.
While addressing as the chief guest Mr. Zunaid Ahmed Palak said that the celebration of Birth Anniversary of Bangabandu would be success only when we can spread the ideology of Bangabandhu among the children. Bangabandhu was very honest, loyal and protestor from the very beginning of his childhood when he was a school going kid. If our students could follow and own his ideologies in their mind, then the celebration of birth anniversary would be successful. He thanked the organizer for arranging this kind of program.

Mr. Zunaid Ahmed Palak, MP also said that he is amazed and pleased to see the creativity and innovation of the children. Bangladesh would be developed through the contribution of these children. After few years later this talented generation would play the vital and responsible role to build a developed Digital Bangladesh, He added.

We have 257 guests and no members online