To create awareness on environment issues and to engage young groups in developmental work and to ensure safety of our environment, Daffodil International University (DIU) and Friedrich Naumann Foundation for Freedom (FNF) of Germany are jointly going to organize ‘Green Freedom Short Film Competition and Cleaning Festival 2016’,
The announcement of the program was made at a ‘Meet the Press’ today (Wednesday) on September 7, 2016 held at the Conference Room of the National Press Club. Famous film maker Morshedul Islam, Dr. S.M. Mahbub Ul Haque Majumder, Pro-Vice Chancellor (Acting), DIU, Professor A. M.M. Hamidur Rahman, Dean, Faculty of Humanities and Social Science, Professor Dr. Engr. A. K. M. Fazlul Hoque, Registrar, DIU, Dr. A.B.M. Kamal Pasha, Head, Dept. of Environmental Science and Disaster Management, Dr. Najmul Hossain, Country Representative, FNF, Bangladesh and Mr. Syed Mizanur Rahman, Director, Students’ Affairs, DIU were present at the conference. Morshedul Islam announced the inauguration of the competition and unveiled the logo.
This was informed at the ‘Meet the Press’ that there will be basically two events, one is Short Film Competition and the second one is Cleaning Festival. Any student group comprising with maximum five people from college or university can participate in the both competitions. To participate in the competitions interested students have to fill-up a Google Form to ensure their registration to participate. The Google Form is now available on the Facebook event page (https://www.facebook.com/diufnf/?fref=ts).Maximum three groups can participate from each institution. Interested participants for Short Film Competition have to submit the synopsis of their film. The registration form will be closed on September 30, 2016. 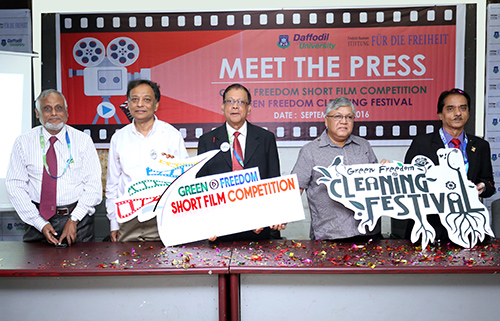 After completing the registration, organizers will contact with the participants. The Cleaning Festival will be held on October 14, 2016. Under the cleaning festival, participants have to clean two areas Dhanmondi Lake and Hatirjheel. These two areas will be divided into different zones for different groups. The group who will clean its respective zone first and properly will become the winner.

For Short Film Competition, a panel of judges will select ten participants judging their synopsis. The selected participants will get call for grooming session. After the grooming session the participants will get a seed money to make the short film. The last date of submitting their film is October 31. Top three short films will be awarded. The award giving program and screening will be held on November 05, 2016 at Bangladesh Shilpakala Academy. The winners will be awarded by handsome prize money, certificates and crest.

We have 193 guests and no members online