DIU Business & Education Club (DIUBEC) organized “Presentation Competition 2016” on April 3, 2016 at 11am in the Banquet Hall (Daffodil Tower-05). The prime objectives of the program were to bring students out of the stage fear, to improve their communication skills, to make them competent and confident for the job market. The completion was divided into three parts: Grooming Session, Qualifying Round and the Grand Finale. 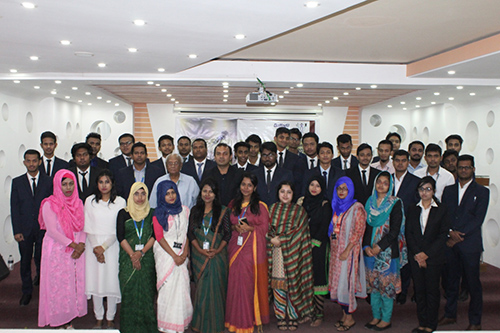 Finalists “Presentation Competition 2016” of  along with distinguished guests  in a photo session.

Total 50 teams from different departments participated in the competition. After the Qualifying round, 12 teams were selected as finalists. In the final round, judges came up with top 3 teams. The team “Invincible 34”became the Champion, and the teams “Squad” and “Bizarre” became the 1st Runner-up and the 2nd Runner-up respectively. Professor Rafiqul Islam, Dean, Faculty of Business & Economics was present as the chief guest and Mohammed Masum Iqbal, Associate Professor & Head, Department of Business Administration presided over the Grand Finale session.

We have 833 guests and no members online