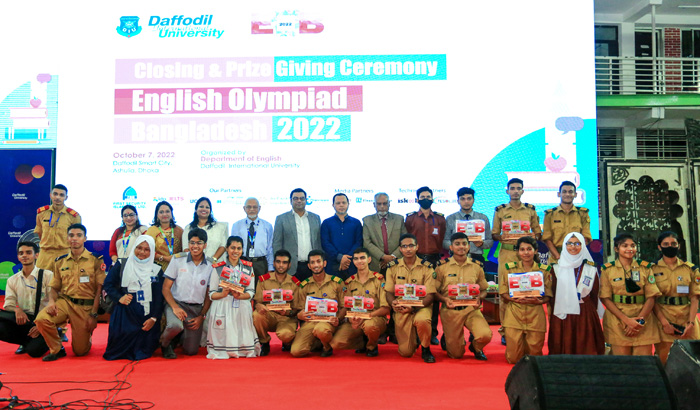 The final Round and the Prize Giving Ceremony of the English Olympiad Bangladesh 2022 held today (October 07)  at Daffodil Smart City at Ashulia, Dhaka organized by the Department of English of Daffodil International University. English Olympiad Bangladesh 2022 is organized by the department for the third time with the motto “Show your English talents, Go for greater challenge” to make our youth as competent global citizens to take lead in international activities.

The competition attracted students of class 9 to 12 (including "O" and "A" level) from all over the country and a total number of 977 students registered themselves for the event which was divided into two categories: Senior Category (College Level) and Junior Category (School Level). After the online preliminary Selection Round, 499 participants were selected and called on for the Theater Round, which focused on English reading and writing skills, and then 40 chosen participants from both categories competed in the Final Round by presenting their extemporaneous speeches on current generic topics.

Eminent Professors from various tertiary institutes join as Judges and Guests along with Principals from selected institutions. Overall, this was a scholarly gathering of academicians and budding stars of tomorrow. The representatives of the partner organizations and sponsors, judges for the final round were also present and they also took part in the announcements of results.

We have 819 guests and no members online