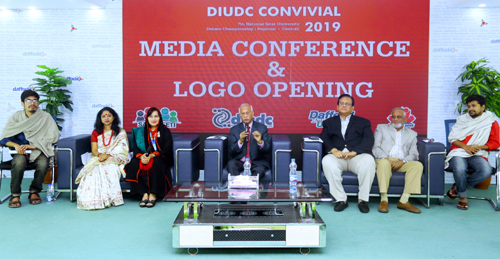 Daffodil International University Debating Club (DIUDC) and ManusherJonno Foundation is going to organize 7th National Inter University Debate Championshipwhich is titled as ‘DIUDC Debate Festival 1626’ and the festival will be held five month long. Students of universities, college and madrasha form 6 District (Dhaka, Narayanganj, Munshiganj, Manikganj, Norshingdi and Gazipur) of Dhaka Division will took part in this Inter District Debate Competition and Debating Workshop. The inaugural program of regional competition will be held on 12th January 2019 at Norshingdi.  After completing regional competition, the national competition will be held in the campus of Daffodil International University. Around 1000 students will be attend this gala event.
All of those information was announced today on 9th January 2019 through a ‘Meet the Press’ at 71 Milonayoton of Daffodil International University. Professor Dr. Golam Rahman, Former chief information commissioner was present at the program as the chief guest and Mr. HamidulHaque Khan, Treasurer, DIU was present as special guest. Ms.ShahjzdiGegum,Deputy Program Manager,ManusherJonno Foundation, Professor A M MHamidur Rahman, Dean, Faculty of Humanities & Social Science, DIU, Professor Dr. FarhanaHelalMehtab, Moderator of DIUDC, Mr. Omar FaruqShimanto, General Secretary, DIUDC were also present at the program. The program was presided over by Mr. Al Mukitul Bari, President of DIUDC.
While Addressing as the chief guest Professor Dr. Golam Rahman said that a rational national will be built through debating culture. So debating culture have to be spread into remote area. Debate also make leadership. He expresses hope that young leadership may come out by this debate festival.
Other Guests were said on the program that DIUDC will establish debating club on those university, college and madrasha campus where there is no debating club still now. DIUDC will also establish debating forum in some district to spread debating culture among the young students.
It may be mentioned that DIUDC is working restlessly to spread debating culture among the young students from 2014, when it was established. The club has more than 300 member at present.

We have 121 guests and no members online