along with other participants in a photo session

We are immensely delighted to share that Daffodil International University (DIU) participated 10th Asian University Presidents’ Forum (AUPF) 2011, held at the VIT University, Vellore, India (www.vit.ac.in ) on November 14 to 16, 2011. DIU presented its views on the development of higher education in our country, the experiences of the university in developing undergraduate and post graduate degrees and the university's role in meeting the country's human resource needs.

The 3-days program was inaugurated by Mr. M.M. Rajendran, Former Governor, Orissa while the Valedictory speech was delivered by Mr. K. Rosaiah, Governor, Tamil Nadu. Among other, as many as Heads of 35 Universities from 23 different countries of Asian region took part.

The Asian University Presidents Forum (AUPF) is a result of the cooperation among Asian non-governmental universities, which initially evolved from the Non-governmental Collaborative Association of Presidents of Chinese and Thai Institutions of Higher Learning set up at Srinakharinwirot University, Thailand, in 2002. But later, the Association evolved to include Universities from other Asian countries as well. The next, AUPF2012 will be hosted by Dongseo University, South Korea.

DIU is the only university, which represented Bangladesh on that grand occasion, followed by the invitation from the host, VIT University, Vellore, India. Mr. Md. Sabur Khan, Honorable Chairman, Board of Trustees, represented DIU (and Bangladesh as well), took active part in the whole program, visited the entire area, presented his paper, attended question-answering session, signed a couple of MoUs on behalf of DIU and planted tree. 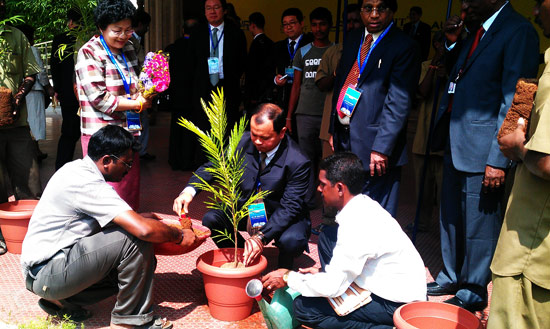 planting a sapling at VIT University

Attending this occasion will be a remarkable milestone of the entire history of DIU.

We have 239 guests and no members online